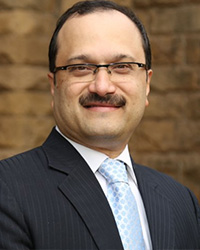 After completing his postgraduate in Mumbai, Dr.Patki proceeded to the U.K where he obtained his MRCOG. He worked at the London Hospitals for 4 years & did a post doctorate research fellowship in Assisted Reproduction before returning to India in 1997. Since then he has worked at two distinguished Institutes in Assisted Reproduction. He has over 30 scientific publication and several book chapters to his credit. He is an editor of 3 books in the specialty. He has been invited all over India and abroad to give guest lecture on a wide range of topics related to infertility. He was part of the Embryonic Stem cell research team at the Reliance Life Sciences where they were approved for Federal funding from the US for 8 cell lines. He has two international patents to his credit for work in infertility and embryonic stem cell research.

He has won several awards at National and International Level. He has been a recipient of FOGSI Corion award 2003 for best Research in India, MOGS Young Scientist Award 2005 and MOGS Dr. Ganatra Charitable Medical Centre Award for Commitment, Promotion and services rendered to the cause of Women’s health in 2015.

He has been TEDx speaker, the first gynecologist & Infertility specialist doctor from Mumbai.