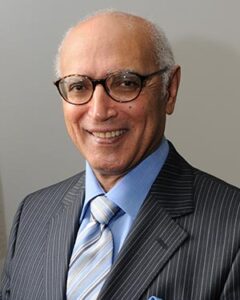 He with two of his colleagues established the first IVF center in Egypt on March 1986 and delivered the fist IVF baby in Egypt August 1987. He established the IVF unit at El Galaa Maternity hospital, MOH in 2000. And Al Azhar University ART unit in 2004.

He was a member of the Board of director and treasures of the International Association of Bioethics (IAB) since its establishment in 1992- 1998.

He established the Egyptian Fertility Society (EFFS) in 1994 and is the EFFS’ President since 2004.

He authored and co-authored 368 papers, 30 chapters and 18 books in national and international publications, a reviewer and member of the Editorial Board of several international Ob/Gyn, human reproduction, population science and ethics Journals and has been an invited and keynote speaker in a large number of national, regional and international conferences. He conducted a huge number of training workshops for Imams, religious leaders, parliamentarian, political leaders, NGOs and HCPs on Sexual Reproductive Health and Rights, Violence against children, gender issues and population policies.